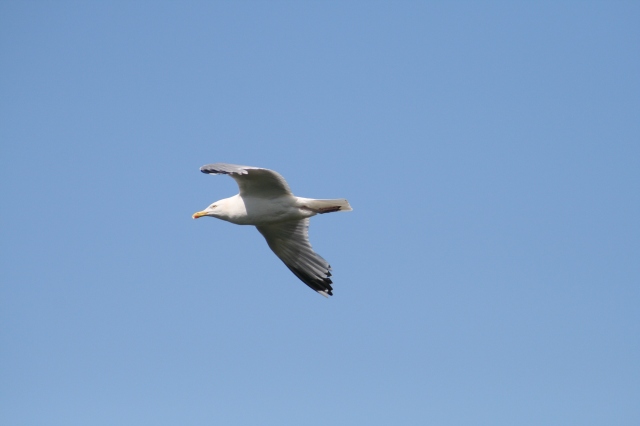 As with so many of the books, it was a chapter of accidents that ended up in giving Marcia the settings she required. This is not the place to record all out trips to try and sort out the right location but the day when everything came together started very badly: I was very tired and in a bad mood. We were back to a situation where the book was set in a place that took at least an hour and a half to reach. Taking into consideration the return journey, that takes quite a slice out of the working day. And I was tired after spending the previous day on the north side of the Camel to no avail. This time we cut through Wadebridge and then off to the right towards Padstow.

However, just before we reached the top the hill that plunges down to that village, I turned left. We had already agreed that the convent, wherever it was, would not be in Padstow so that seemed a reasonable decision. It seemed less reasonable when we ran out of road. The view was wonderful. There was the river Camel with the tide fairly low. It was one of those sparkling September days which seems to wash most of the colour out the sky and the winter corn in the field below us was just showing.

Anyway, I had no option but to turn around and go back the way we had come. Luckily we saw the Padstow Farm Shop at Trethillick and stopped there to buy the makings of lunch. After that I just took the next right and carried on until I found somewhere to park. Neither of us knew where we were and I certainly did not care. I was hungry. The view over the newly sown field, with rooks digging for grubs, across to Kellan Head is glorious. Marcia pottered off while I sorted lunch (having a few illicit mouthfuls whilst so doing).

She came back bubbling with excitement. She had been standing looking at this funny little door in a wall that crosses the Coastal Footpath (although you can walk around the end most children prefer to go through) and, the most wonderful news, ‘seen’ Janna walking to the convent: it had to be nearby. 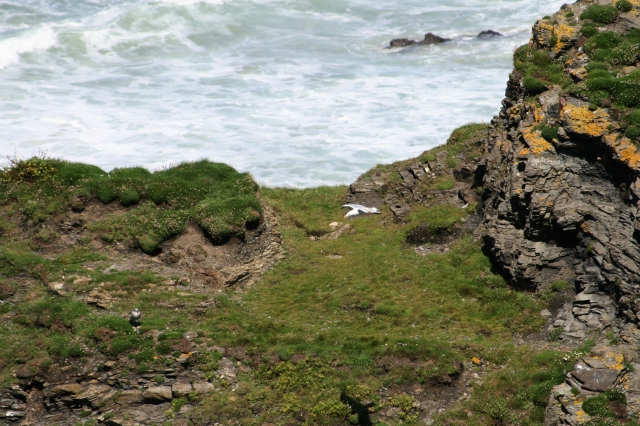 We were only a field away from the coast and that footpath. The cliffs fall away to the sea below and where ever you look there are seagulls, soaring on the wind or perched on the cliffs. 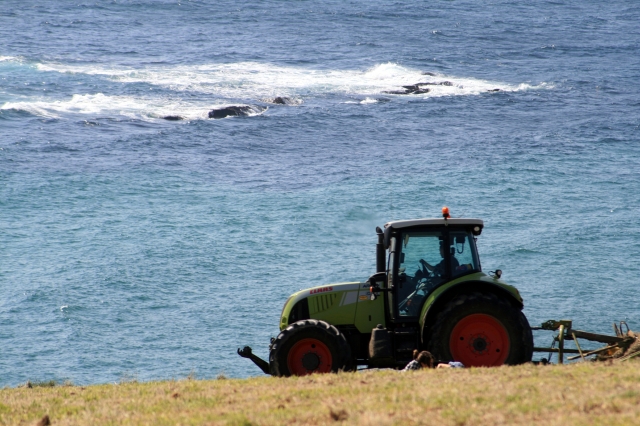 Having agreed that the convent was nearby and to the north of us we now had a problem. I had no idea where we were (very unusually I had forgotten to put the maps in the van) so the convent was north of where?. I decided that we should drive on and see what happens. It was quickly revealed. The lane, and it was barely wide enough to be called that, began to drop down and on our right was a farmer ploughing a field with the sea as a backdrop.

At the bottom the lane joined the beach and, after crossing it, became a decent road leading up through a village. This we discovered (simply because we can read) was Trevone.

We decided enough was enough for one day but the next we were back. We drove down to the Padstow Farm Shop to get some provisions (like so many of the west country farm shops what they sell is of the highest quality) and then retraced our steps very slowly. On the right a few cars were parked at the the head of a little valley that dropped down to a sandy clove. When did Marcia decide to call the village she created sitting at the bottom of this cove ‘Peneglos’? I’m not sure but now we knew where it was with its steep lane down to the sea and its old cottages huddled together while, at the top of the hill, stood the convent itself.

We returned many more times, more often than we needed to, but this patch of the coast had everything. The long views both to the north and . . . 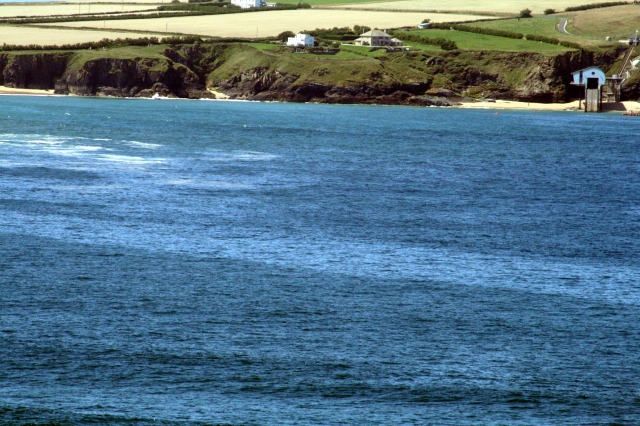 . . . and to the south. That’s Onjohn Cove and the building to the right with the slipway is home to the Padstow Lifeboat. It has to be outside the River Camel as it would be unable to cross the bar at the entrance (Doom Bar and very well named) at low tide. And, of course, there is the ever changing colour of the sea.

Then there are walls covered in lichens where snails tuck themselves away during the day.. . . 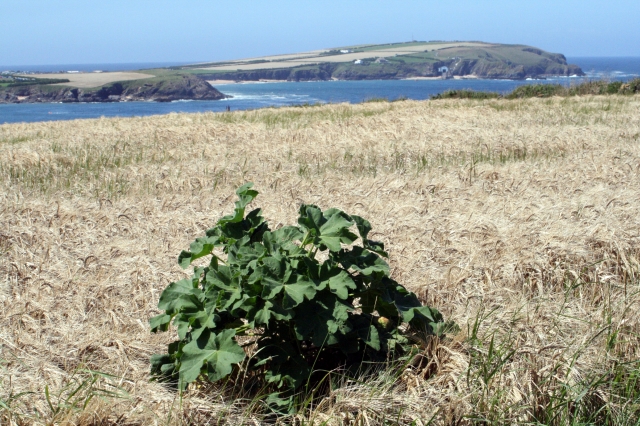 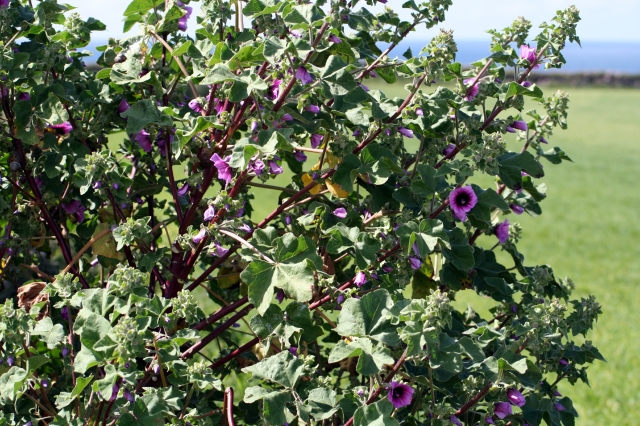 To our astonishment mallow, which neither of us expected in this environment, grows in little clumps all over the place.

I love the interplay between the sea and the rocks. 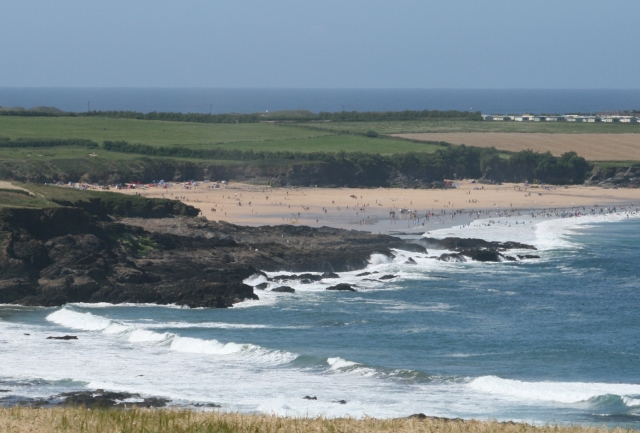 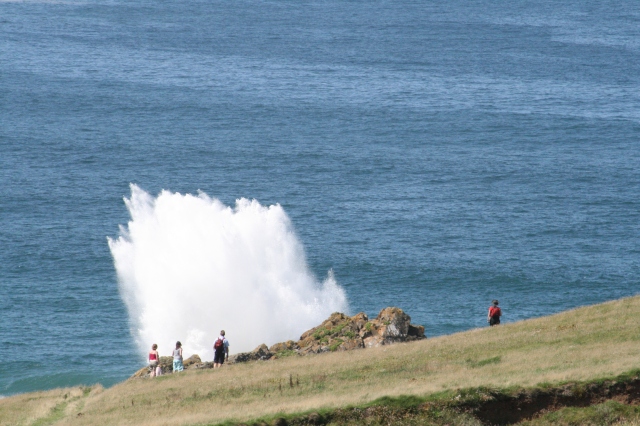 Walkers are often surprised as the pass Roundhole Point by the height the spray reaches even when there is not much of a sea running. 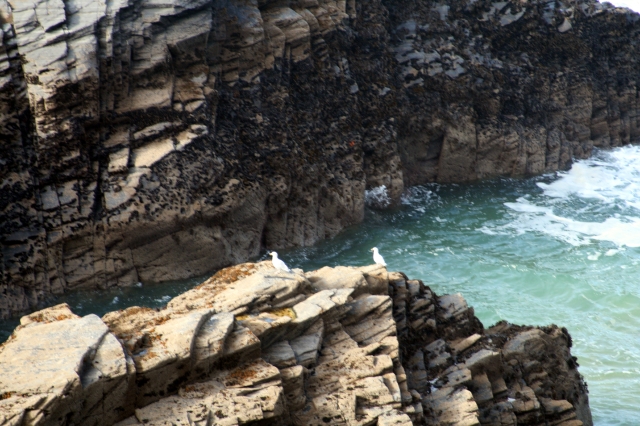 This is one of my favourite pictures: the colour of the sea and the light on the rocks but, above all, the two gulls who give the impression that they are looking at something of which they disapprove and is occupying their conversation.