Port Quin has a tidal range of some 6 metres or about 20 feet. You can see the high tide level on the cliff to the right: aboe high tide the rocks are covered in lichens but below they are black. When the tide is in all the rocks in the foreground are covered.

There is no doubt but that Marcia modeled St Meriadoc on Port Quin – but she moved some of the properties about, demolished others, brought one in from a few miles south and, finally, built a new little gentleman’s residence very like the one we found a bit further north on the same coast. 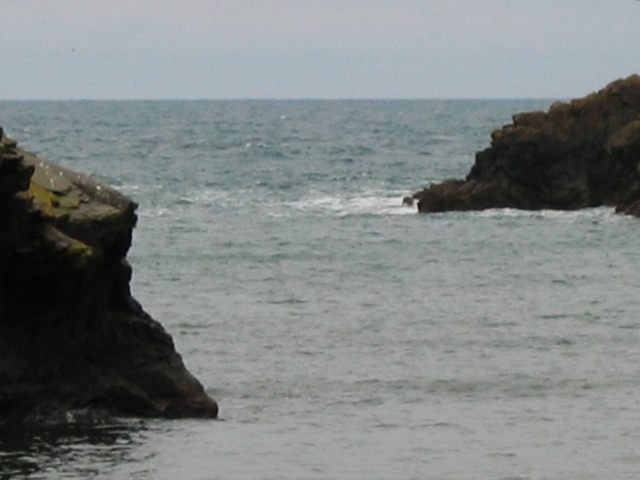 The entrance is quite narrow and there are currents that make it only too easy to be swept onto the rocks that await the unwary.

Port Quin (or, as some prefer, Porth Guinn or Porth Gwynn) means ‘the white port’ but I can find no reason for giving it such a name but it has been called that for a very long time: in 1327 a man known simply as Laurence decided he needed to adopt a surname and so called himself after the port too became Laurence de Porquin: so that’s how it was known then. 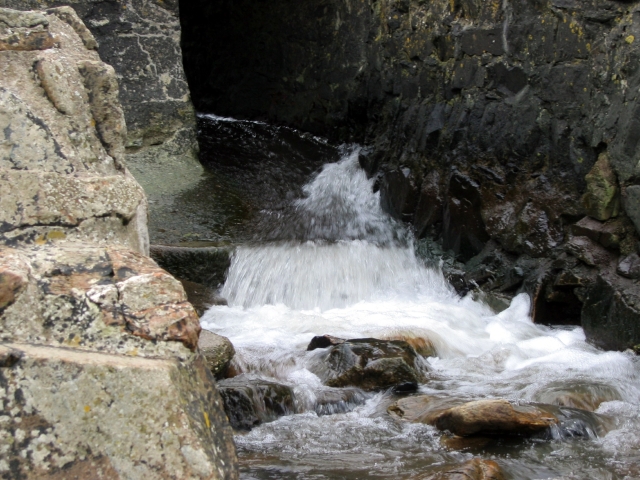 This culvert carries the stream running down into the cove for the last hundred yards or so before it discharges onto the beach. It is quite a sight after heavy rain: the water fills (and sometimes overfills) the culvert and the sound of it pounding its way through can be quite dramatic. Powerful stuff, water.

It is a very narrow cove facing out to the North Atlantic and offering extremely good shelter to boats but care has to be taken in leaving or entering the harbour when there us a south west gale booming its way between the cliffs on either side. Nevertheless it was well situated for coastal trade and in Medieval days, ships from here made regular voyages to South Wales carrying various minerals and building materials – not all of which left the cove: in the fifteenth century the granite with which the church at St Endellion was built was quarried on the Isle of Lundy and brought here for unloading.

Nearly high tide on a nice peaceful day in November.

Having said that, the villagers’ survival really depended on the annual pilchard catch. From August (the first fish would arrive off Land’s End in July) to December at was all hands on duty. Boats with a full load of fish would arrive in the port and the fish unloaded into wicker baskets, They would be gutted and laid in huge mounds with salt between each layer, Care had to be taken to avoid damaging the fish. After about a month, the fish would be arranged in barrels (again taking great care) and each barrel would take about 3,000 fish. The fish were then pressed: a barrel would yield about 8 gallons of oil which was used for lighting and was a very valuable factor in the port’s economy. 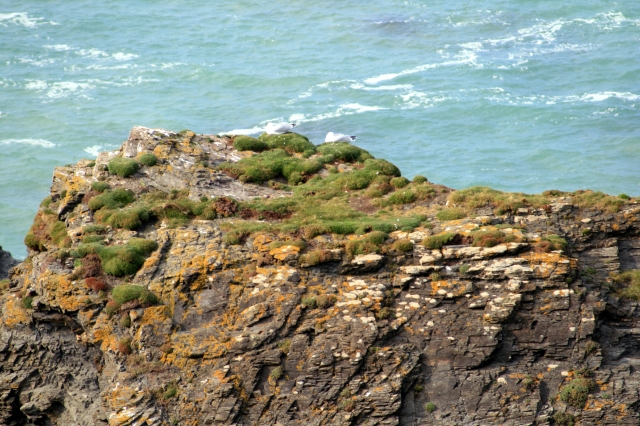 The size of the fish cellars in Port Quin suggest a thriving community but as the number of pilchards declined so did the population. At the same time a number of tin mines closed and so the second most important source of income was shut to the people. Gradually they moved away with many emigrating to Canada. It is said that the final blow came when all the men in the village went out fishing one day. A a storm blew up and not one returned. It seems impossible to date this event more accurately than to say it happened in the 19th century. Some believe it was the hand of God showing His anger because the men set sail on the Sabbath. 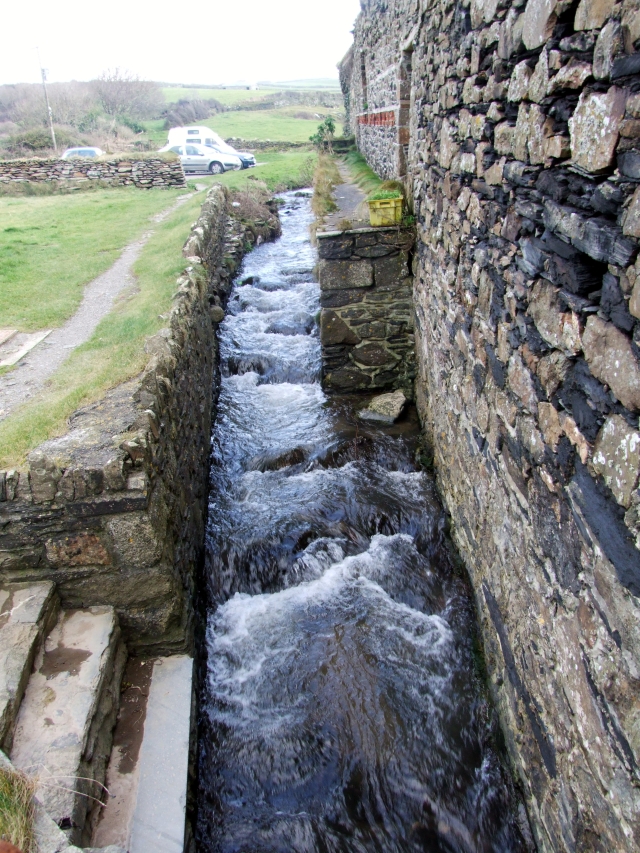 The culvert again further upstream with the National Trust car park in the background.

Now this sleepy little cove is a popular spot for tourists. It is owned by the National Trust and is in an Area of Outstanding Natural Beauty: its future seems to be reasonably well assured. There are, as you would expect, various holidays available here from self-catering through to full hotel board.

Cornwall is a mysterious land in which it is only too easy to see the myths and legends of the old Cornish saints and warriors as being exact reports of historical events. Indeed, most of them are, I have little doubt, based on some actual happening if somewhat embroidered and given magical explanations where no other explanation could be found.

Although Port Quin was the final model, the inspiration for “Paradise” came from a village on the coast of Devon: St Gennys. Marcia was much taken with the way the hamlet and church snuggled down into the land as if to protect itself from the wild gales that pound this coast in the winter.

St Piran is the Patron Saint of Cornwall: he is also the Patron Saint of tinners. Legend has it that St Piran was busy trying to convert some heathens in Ireland when they became tired of his nagging and so, very reasonably, they tied him to a millstone and threw him into the sea: problem solved, especially as there was a great storm blowing at the time.

What happened next was a trifle unexpected. The winds stopped blowing, the sea became calm and St Piran was gently floated across the waters until he landed on a lovely sandy beach on the north coast of Cornwall within the (now) parish of Perranzabuloe. Here he soon had three disciples: a fox, a badger and a bear. They were swiftly followed by many of the converts he made to Christianity. It was not long before the Abbey of Lanpiran was established: the abbot was, as you would expect, Piran.

Doyden Fort, a folly built in the 1830’s, was the model for “lookout” near the entrance to the cove at St Merriodoc. It can bee seen a few miles to the west of Port Quin.

More prosaically, Piran discovered the art of smelting tin. It is said that as the fire on his black hearth stone heated it so tin welled out of it and formed a white cross on the surface. It was this that stood as the model for the Cornish flag and the reason he became the Patron Saint of tinners. It is almost certain that this is an accurate description of how man discovered how to smelt tin: if you choose a piece of black rock which is rich in tin for a hearth stone you will end up with just this happening (well, there may not be a neat and tidy cross). No doubt it did not always make those around the fire come to any useful conclusions but every now and then it would make someone think and those thoughts moved on the learning which rocks bore the tin ore and how to extract it with the least effort.

Doyden Fort was a folly built in the 1830’s. It was the model for the “lookout” that Bruno turned into his home and also used as one of the sets in the Doc Martin series set in this area. It stands a few miles west of Port Quinn.

Then Marcia wanted there to be a holy well (there are an awful lot in this part of the world) named after a saint and then the hamlet that sprang up here would bear his name as well. We wanted someone fairly unknown and, having been pointed in the right direction by a friend of ours, opted for St Meriadoc. He was born in Brittany where he was ordained. He then embraced the life of a hermit but was made the Bishop of Vannes (much against his will, according to some sources) which meant he had to give up his life as a hermit. At some point he crossed the channel to Corwnall where he founded an oratory near Camborne. Suffering persecution at the hands of King Teudor, he was forced to return to Brittany. He is the patron saint of Camborne (home of the world famous Camborne School of Mining) and, for some reason, there are a number of schools in the county which have taken his name.